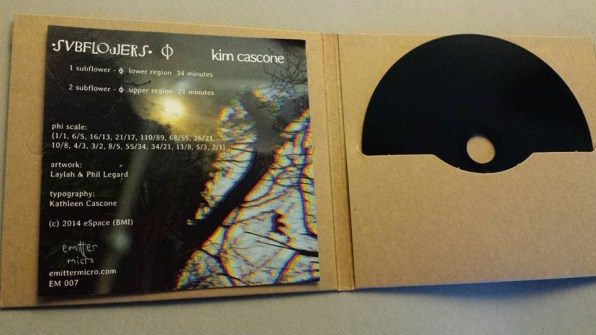 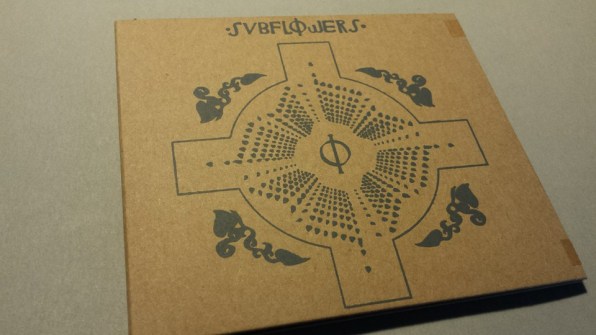 Quite surprised actually to see this CDR release in an edition of just thirty-three copies.
One would think that the name Kim Cascone would be able to sell a few more records? Once working
for David Lynch films, then running his Silent Records, pushing it to great height in the dance of
ambient house (including his own Heavenly Music Corporation) and then working with software and
playing audiences all of the world. After that perhaps a bit more silent (pun perhaps intended)
he is these days concerned with listening to music in a more meditative way, and sometimes organizing
‘drone cinema’ events. I forgot to mention that playing the guitar is also an interest. No doubt
there is much more told be told about him. I am not sure if he plays guitar on this release, but
I doubt that. Having said that, it is also not easy to say what it is that he does. Two pieces here,
the lower and upper region of ‘subflower phi’ (as in referring to the golden ratio, I would assume),
and both are very much pieces of drone music in which really not a lot happens. Or so it seems?
It’s not easy to say. It seems like single tone is locked inside a modular synthesizer and that’s
it. But that’s not the case if you listen closely (and maybe that is not the idea? To listen closely?
Maybe it’s Cascone’s intention to have this just running as it is, and the listener should engage
in other things, or perhaps in no-thing at all?), you hear the very minimal changes that occur in
this music. The tone very slowly changes and this can be heard better in the upper region than in
the lower region I think and I found this is best played at a medium to low volume. The sound will
not be all-immersive, but rather fill your space in a highly refined way, just as good ambient music
is intended (and where it’s different from the world of new age). Excellent release, and perhaps a
pity so few copies were made. This needs to be heard by more people! (FdW)
Address: http://emittermicro.com